70 years of Geneva Refugees Convention – a reason to celebrate? 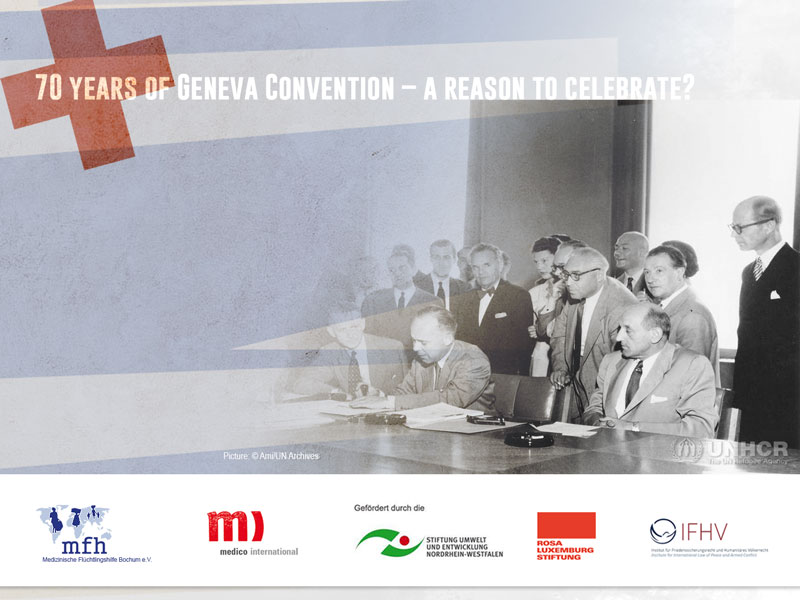 Series of lectures on 70 years of Geneva Refugees Convention

Between July 2021 and February 2022 MFH Bochum realized 10 webinars as series of lectures with international academic experts and human rights activists in cooperation with medico international and the Institute for International Law of Peace and Armed Conflict (IFHV).

Our series of lectures focused on the Geneva Refugees Convention that celebrated its 70th anniversary in 2021 in times where UNHCR documented more refugees than ever before. For the year 2021 UNHCR reported 82,4 million people on the run.

In the year 1950 the UNHCR was founded to deal with refugees in Europe after World War II. Today, its mission is to protect refugees worldwide and to organize humanitarian aid. Being the biggest humanitarian organization worldwide, UNHCR promotes durable solutions regarding refugees based on three strategies: resettlement, integration and voluntary return. In Europe, the focus of UNHCR lies on legal protection for asylum seekers and recognized refugees. In 1951, the Geneva Refugee Convention came into force being a binding instrument of humanitarian international law obliging host states to provision, allocation and integration of refugees.

For many years, MFH has observed that refugees‘ rights are increasingly undermined -  both during their flight and after their arrival in host countries. Constant tightening of asylum legislation and a policy of rejection and deportation instead of protection means that people are often unable to claim their rights under the Geneva Refugee Convention (GRC). Even for those refugees who made it to the EU the political message is clear: refugees should not try to come to the EU as they have to wait for years for the decision about their asylum applications while living in camps under inhumane living conditions and fearing deportation. To prevent refugee movement, the EU is willing to make questionable deals with authoritarian governments such as Turkey or Libya. In doing so, the EU also bears responsibility for systematic human rights violations, which in the case of Libya, for example, extend to torture and enforced disappearances – a clear violation of the non-refoulement and the GRC.

In order to discuss and to find solutions for a more righteous refugee policy based on their rights given by the GRC, we invited numerous experts and activists including the so-called LERRN network - the Local Engagement Refugee Research Network - thanks to the support of James Milner from the Refugees Studies Centre in Oxford.

Given that 80% of the world's refugees live in the Global South, but international refugee protection is usually guided by the interests of the Global North, we wanted to include this important perspective to the lectures in order to facilitate a cross-thematic North-South exchange as well as an exchange between academics and activists.

We would like to thank all speakers who participated in this series and gave important impulses for a refugee policy based on the rights of refugees. You can find the recordings of the individual events and discussions here:

Maximilian Pichl has written the study "The Moria Complex" on behalf of medico international. Here he examines the responsibility of the EU and its member states for the violation of the rights of refugees at the European external borders and what legal steps are conceivable to hold those responsible accountable.

History and Development of international refugee protection with Dr. Phil Orchard from University Wollongong Australia and Rez Gardi from The Centre for Asia Pacific Refugee Studies refugee in New Zealand

Phil Orchard and Rez Gardi gave a lecture about the history of international refugee protection from the League of Nations to the UN and from Fridjof Nansen to FilippoGrandi. They explained the work of the UNHCR and the development of the UN Geneva Refugee Convention), adopted in 1951 and extended in 1967: How did refugee protection change throughout the centuries? How did World War I and II influenced the codification of refugee protection? What kind of developments led to the GRC?

The Geneva Refugees Convention and its history: how das refugee law work? With Nikolas Feith Tan from University Copenhagen and Janemary Ruhundwa from Dignity Kwanza in Tanzania

Our experts presented the history and development of the UN Convention relating to the Status of Refugees, its 1967 Protocol and the work of the UNHCR in the course of the last seven decades. We discussed changes of UNHCRs mandate throughout the 2nd half of the 20th century as well as the obligations of states and the effectiveness of UNHCR’s strategies on resettlement, integration and voluntary repatriation. Where are protection gaps and limits of the Geneva Convention and how can we overcome them to improve international refugee protection?

Protection in the global south: the situation in first destination countries with Dulo Nyaoro from Moy University in Kenia; Dr. Ranabir Samaddar, Chair in Migration and Forced Migration Studies, Calcutta Research Group, India and Dr. Oroub El-Abed from the Centre for Lebanese Studies at the Lebanese American University-Beirut

New Emergencies and protracted crises: refugee protection at risk with Dr. Jeff Crisp from the Refugees Studies Center at the University of Oxford and Allehone Abebe from UNHCR South Sudan

The EU policy towards refugees has become more and more restrictive since 2015. Border controls, illegal pushbacks and deals with often authoritarian regimes are criticized by human rights activists and lawyers. In this session we discussed about EU refugee policy, how refugees‘ rights can be strengthened and which legal ways are accessible to challenge member states’ shortcomings and violations of the GRC.

Since the adoption of the Global Compact on Refugees in 2018, humanitarian aid and international development cooperation become more and more important in international refugee protection. Simone Schlindwein presented outcomes of her researches on EU deals with governments with the aim to hinder refugees to enter EU territory and to keep them in the Global South in return of humanitarian and development aid programs. Nina Violetta Schwarz presented the outcomes of a project analyzing the effects of voluntary return programs and the consequences refugees face when they decide to return to their countries of origin.

Human Rights Defenders: challenges on the ground, at the sea and in camps with Moctar Dan Yaye from Alarmphone Sahara, Katarzyna Slubik from the Association of legal intervention in Poland, Raed Alobeed from the Moria White Helmets and Maurice Stierl from Alarmphone

Being confronted with a restrictive refugee policy in the EU, refugee protection lies today mostly in the hands of human rights NGOs and activists – at EUs external borders to assist refugees that are stuck and pushed back by security forces, at the sea where they safe thousands of lives from drowning, in refugee camps to improve living conditions and to find legal solutions. We discussed with the panelists the attempt to criminalize their support of refugees trying to seek protection in the EU and of refugees themselves that are prosecuted and indicted as alleged terrorists like The El Hiblu 3.

Children on the run with Jacqueline Bhaba from Harvard University, Jason M. Pobjoy from Blackstone Chambers and Lenny B. Benson from New York Law School

According to UNHCR, 41 per cent, or 10.1 million of all refugees, are children. Refugee children are not only overrepresented demographically among other refugees, but they also suffer from a double vulnerability – as children and as refugees. They often face perilous journeys, separation from their families, exploitation, or human trafficking. And even once they arrive in supposedly safe countries, they regularly encounter administrative and judicial systems that ignore their concerns and rights as special vulnerable group.

After an intense analysis of the history and current state of international refugee protection throughout our series of lectures, this last session was a discussion on future challenges and what is needed to strengthen refugees rights and to establish worldwide solidarity instead of building walls and fortresses that intend to exclude human beings that seek international protection and support.

This website uses cookies to improve your experience while you navigate through the website. Out of these, the cookies that are categorized as necessary are stored on your browser as they are essential for the working of basic functionalities of the website. We also use third-party cookies that help us analyze and understand how you use this website. These cookies will be stored in your browser only with your consent. You also have the option to opt-out of these cookies. But opting out of some of these cookies may affect your browsing experience.
Necessary immer aktiv
Necessary cookies are absolutely essential for the website to function properly. These cookies ensure basic functionalities and security features of the website, anonymously.
Functional
Functional cookies help to perform certain functionalities like sharing the content of the website on social media platforms, collect feedbacks, and other third-party features.
Performance
Performance cookies are used to understand and analyze the key performance indexes of the website which helps in delivering a better user experience for the visitors.
Analytics
Analytical cookies are used to understand how visitors interact with the website. These cookies help provide information on metrics the number of visitors, bounce rate, traffic source, etc.
Advertisement
Advertisement cookies are used to provide visitors with relevant ads and marketing campaigns. These cookies track visitors across websites and collect information to provide customized ads.
Others
Other uncategorized cookies are those that are being analyzed and have not been classified into a category as yet.
SPEICHERN & AKZEPTIEREN